The day before this day, we were told that today we have to wear semi-formal attire to do the field observation. I thought it wasn’t suitable since we will explore tempat-tempat becek khas pedesaan (haha, my image about village is always like this >_<). And some of the participants were also think so, Kentaro asked the committee whether we can wear casual or even gembel attire, but the committee still said that it’s better to wear semi-formal.

Since when I became a submissive? Hehe. Of course I won’t wear semi-formal attire. I wear long-sleeve t-shirt, black trousers, and a hat. I’m ready to explore!! \^o^/

Day #3: We also have no idea in what form the Bancho would be

This morning, some of Japanese students brought funny and interesting stuffs. Kentaro brought bubble soap toys that can make many bubbles or very big bubble. I tried it, and I can make veerryyy biigg bubble, but unfortunately, there’s no picture to proof it, only the picture when I was about to blow it. 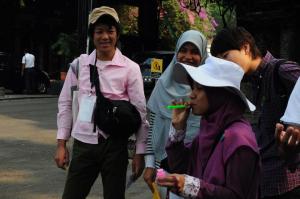 Besides that, I also got erasable pen from Yuki! The pen is sooo interesting. Just now I knew there is something like that 😛 Another friend (I forgot who) told me there are pens like that in Gramedia but I never saw one. Shota told me the technology. Ink that is used in this pen is special. Unlike ordinary ink pen, it has lower boiling point. When we use the eraser (that is sticked on the upper part of the pen), it means that we apply friction on the surface of the ink. The friction produce heat that makes the ink evaporates. That’s why the ink can be erased. (Later, when I tried to erase ordinary pen, it didn’t work 😦 )

My team was group 4, so we (together with group 5 and 6) went to Cipanjalu Village, Lembang, while group 1, 2, and 3 went to another village (forgot the name >_<). Cipanjalu Village is guided village of HMM. In this village, they developed bio-gas digester that can produce gas by processing cow feces. The gas will be used to turn on the stove in Pak RT’s house and also in Production House. 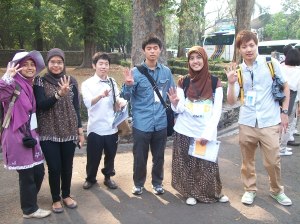 What is Bancho? We’ll talk about it later 😀

So, the journey took about 1,5 hours. Three groups used 2 small buses (usually called “elf”) that can accommodate 15 persons (including driver) each. I sat next to Zahrina and Ito. In front of me were Seiya, Shiba, and Riri. Behind me were Rika, Nanda, and Memes. And at the back side of the bus were Hendydy, Yohei, Yusuke, and Todo.

The scenery during the trip was aaaawesome. Mendaki gunung, lewati lembah, sungai mengalir indah ke samudera lah pokoknya mah 😀 Seiya was busy taking picture of the scenery. Ito was busy studying material regarding Cipanjalu Village. Todo and Zahrina were busy sleeping if I’m not mistaken (where’s the sleeping picture of Zahrina, Seiya? :P).  But me, Riri, and Shiba were busy fan-girling MVs korea in Shiba’s ipad 😛 We even introduced some of the boybands and girlbands to Seiya! But he already knew some such as Kara, SNSD, and T-Ara.

Upon arrival in the village, the air was refreshing and quite chilly, the scenery of hill and trees were so breathtaking, the atmosphere was so calm and quiet since there were only 40 families live here without rumble of motor vehicles. I was glad that we visited this village so we could show to our Japanese friends that Indonesia still have comfortable places without pollution, unlike Jakarta or Bandung.

Our activity that day began with the introduction from HMM about Cipanjalu Village and their programs here. After that we had lunch and did zuhur prayer. Surprisingly, some of the Japanese students ( I only remembered Daiki, Yohei, Rika, and Kyoko) tried to do prayer, too!!!! They followed our prayer movements awkwardly but very funny 😀 After the prayer, Kyoko said that “It’s much more easier than I think!”. Hehe, you just don’t know that we’re not only doing the movements but also there are some doa yang diucapkan dalam hati (how to say this in English? T_T). How to memorize the doa is one of the challenge 😀

After that, we were divided depends on our group to do a kinda interview with HMM representatives to collect some information regarding the guided village, in this case, my group discussed about production process of the Bancho.

So here we go. Bancho is an abbreviation of Banana and Chocolate. Bancho is a name of product that will be developed in Cipanjalu Village since banana is the most common yield in this village. In what shape the Bancho would be? Here’s the problem.

At first HMM students wanted to make banana chips instead of Bancho. They even have designed the machine to chop the banana thinly. But apparently, when they tried to make chips from the bananas, the bananas were to soft so it couldn’t be hardened, so it wasn’t suitable as chips. Therefor they tried to think another product that contains banana in it. Here comes the idea of Bancho.

But, they still didn’t have clear image what kind of product the Bancho would be. Whether it would be in a form of brownies, or cake, or bread, or bolu..Pokoknya harus ada pisang dan coklat deh di dalamnya -__-” So our discussion was a little bit stuck because of this fundamental problem.

Well, take it easy lah ya..hehe..After the discussion was over, we took a walk around the area of village and saw how the bio-gas digester works. And then we did ashr prayer and went back to Bandung.

But, the day wasn’t over yet \^o^/ On the evening, my group had dinner at Warung Pasta and also discussed the conclusion of today’s interview. The dinner was very fun!! We chatted like old friends (we only knew each other for 3 days, remember?) and Ito-san even told us the secret behind his Bahasa Melayu study!! The reason was so sweet though. But I’m sorry, it’s a secret only for our group 😀

We finished our dinner and discussion on 9.30 pm I think. It was too early (2 days before we ended our activity at 11 pm >_<) but today was quite tiring so we’d better off to bed early.